I completely forgot I had a blog, and I think it would be a good idea to update it. Since my last event was Bot Blast 2015, that's the perfect place to continue

Both Slim Pickens and Thunder Child were ready to go days before the event. Viciously Circular had issues with mixing that I never got the chance to fix during the event (I was going to put it in the rumble or grudge someone).


At the event I was able to easily get through safety checks. I also had the pleasure of meeting Russ Barrow for the first time, who I had been chatting with for quite some time online. Russ had brought Dark Pounder, Dark Blade, and Dark Daggers for the main competition, and Dark Micro 44 and Dark Bullit for grudges and rumbles. 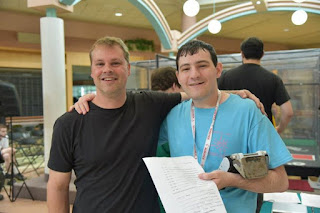 Many of my friends were there, including Jamison Go. It felt weird seeing him for the first time after his television debut on the reboot of BattleBots. 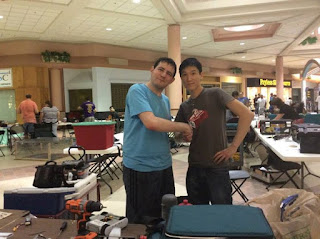 Due to the large number of bots competing this year (more than any other Bot Blast), all matches were shortened to two minutes long.

My first antweight match was against Cornerstone, a 2wd wedge I had fought before at Motorama. Last time I fought it beat me due to my ESCs not being calibrated properly. 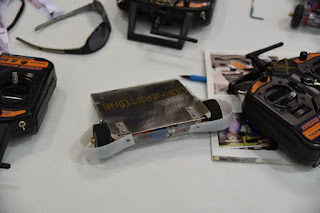 The match went well, as I was able to outpush and outwedge it most of the time. After the two minutes were up, I had won the judges' decision.

Match two was against Sisu, another 2wd wedge (no picture available ATM). Unfortunately for Sisu, its wedge wasn't flush enough to be too effective against me. I dominated it for the entire match and moved onto the next fight.

Satan's Segway was my next opponent. Straight from MIT, this bot was made out of pipes. It previous events, it didn't do so well. As soon as the fight started, one of my Silver Spark motors decided that life wasn't worth living and broke a gear. Slim Pickens was left limping around for the full two minutes and was sent to the losers' bracket.

I went back to the pits and swapped out the wiring harness for Slim Pickens with a spare one I had made before the event. It was ready to go after the ESCs were recalibrated.

In the losers' bracket, I was drawn up against Cyclone, a horizontal midcutter with a nasty blade.

I was really nervous going into this match because this was the first time Slim Pickens ever fought a midcutter, and the fear of my wheels getting chopped off was present. After one good slam into the wall, Cyclone took my wheel off and then followed it up by ripping my wedge off.

Slim Pickens was done for the day. As I went back to my pit table with the bot in hand, Alex Horne, the man who helped me with this bot the most saw the damage that it had sustained. I don't know what happened, but I think a bit of him died that day.

With its brand new steel wedge, I had high hopes for Thunder Child at this event.

With my newfound confidence against spinners, the first bot I was going to face would be an undercutter.

My opponent was Silent Spring, built by Jamison Go from MIT (something something BattleBots joke). What was interesting about this fight was that at Bot Blast two years ago I faced DDT, the one pound bot this one was based off of. He easily beat me.

Immediately, I raced across the arena to try and box rush him. I missed, and then we lined up for a head on collision. One good hit made him ricochet around the arena. After several other bounces, his weapon belt broke and I was easily able to push him around. Thunder Child won on a judges' decision, and suffered only scratches to the wedge and one side panel.

My next match was against Gemini, another 4wd wedge with a 3D-printed frame. 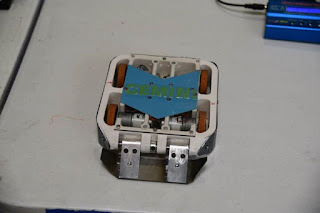 Despite my best driving, I couldn't get under him with my new wedge. This sent me to the losers' bracket, and I was determined to make up for my previous loss. 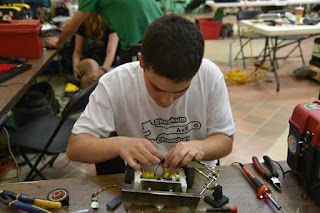 My next opponent was Alex Horne, a good friend of mine. His bot Robo-Rooter came off of a lucky win against drum spinner Arcbeetle. Robo-Rooter was another midcutter with an STD (single tooth disc). I was a bit worried since I thought he could get a good hit on me if I wasn't careful. Thankfully, I didn't need to worry.

Robo-Rooter's weapon never worked, and its drive had problems. It was an easy win for me, and Alex gave me some advice during the match.

My next fight would have been against a scary looking eggbeater named Chibi Knockout, but it suffered drive issues and had to forfeit.
Instead, I ended up fighting its teammate, Don Doerfler's Circuit Breaker. 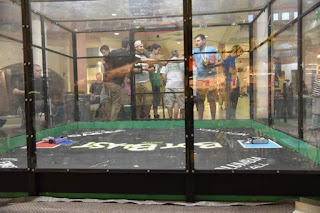 Don's bot was originally another midcutter with a partly 3D-printed frame. After running out of 3D-printed weapon pulleys, he was at the point of forfeiting. I had a spare titanium sheet and offered to give it to him. He duct taped it onto the back of his bot, creating a massive spatula, and added unnecessary but hilarious foam pieces to it.

It was a tough match, but I got the win. He kept charging me with the spatula but I was able to dodge it and give him some good shoves.

The next match was against Gemini, again. I was really nervous fighting a bot that previously beat me, and kind of bummed out that I wouldn't be facing Colsonbot. Not having much confidence in the same wedge that I used the first time, I quickly changed to my spatula wedge, but put it upside down to make a traditional hinged wedge. 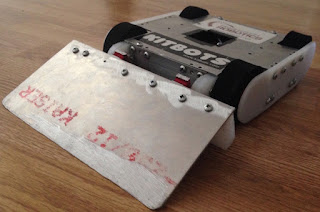 I am happy to say that history did not repeat itself. For the entire match I was under Gemini and straight up dominating him to the point where Gemini's driver was ready to put his transmitter down.

After that, I was guaranteed first, second, or third. I was even more tense.

In the losers' bracket final, I would be facing two-time champion Mondo Bizarro. 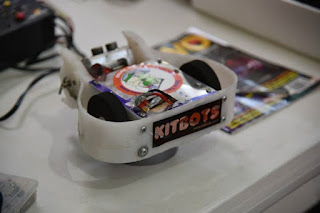 Truth be told, I sometimes underestimate Brandon's bot at events. At Motorama and Franklin, it got some of the worst possible draws. For the past two years at Bot Blast, Mondo had gone undefeated. This year it lost to Dominant Mode in the winners' bracket final, and now I had to face it. 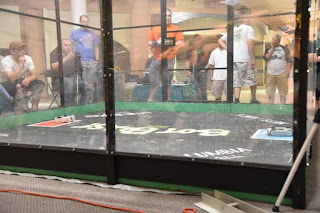 I used the anti-drum attachment that had worked well for me against Grande Tambor, as it was specifically designed for bots like Mondo Bizarro. For most of the match, I had the upper hand. However, the foam block used for shock absorption started to fall off, and Mondo got a good hit on me towards the end of the fight.

At the time I thought I had won. The judges said otherwise. Mondo Bizarro went on to get first place for the third time in a row.

For the first time ever, Thunder Child had placed at an event. All the things I learned from Pete and friends had paid off.

After the regular awards were handed out, Jeremy announced the winner of the Best Driver award. By an overwhelming majority vote, it was me. 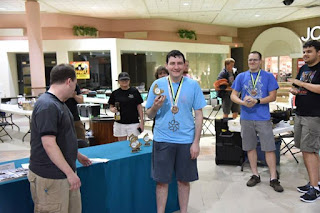 Bot Blast was a success for me. Thunder Child made me love the beetle class a lot more, and I knew that there was a lot more in store for it in the future. Slim Pickens didn't go home without a win, but it's time for another rebuild.

Thank you to all my friends who were there, and Jeremy and family for giving all of us a reason to come back every year!
Posted by Nate at 1:10 PM